‘What’s the time difference over there’ I was asked. ‘About 10-15 years behind the UK!’ I had wittily quipped.

A jovial jibe maybe. But that’s actually not too far from the truth when regarding gin…

I was paying another vacation visit to my parents home base in Evian, France. (Note to reader: If you are travelling to France, the actual time difference is in fact 1 hour ahead. Don’t attempt to set your watches to 2004…).

Now for those of you who have read previous reviews, written by yours truly, you will have likely seen my views and frustrations on the French gin scene (or lack there of!) before.

Indeed, on one previous journey I had resorted to going armed with my own juniper elixir to avoid the disappointment I had become so accustomed to, leading me to the opening statement ‘‘Water, water, everywhere’. But not a drop of Gin?!’.

You can check out my previous rants, and meet ‘my mate Martin (Millers)’ here if you require a little more context:

So then, why do I feel the need to revisit the subject I hear you politely enquire? Why put myself through the trauma all over again? Why risk doing myself a mischief by raking through the angst of old ground once again?

Well fear not my gin drenched hombres! For it turns out that I had not been setting my watch back far enough; the year I had been looking for all along was 1996! You see, had I gone back slightly further I may well have discovered something pretty darn exciting rather sooner than this summer. But time travel aside, a discovery was made. Not only does France have gin – they flipping well make it! And they make it very well indeed. It was my great pleasure to make the acquaintance of ‘Citadelle Gin’. Enchanté…

Now in reality, it may not quite have been the earth shattering discovery that I have initially made out. Indeed, Citadelle is a gin that I have been eager to try for some time. And I was disappointed to have had to miss the teams Master Class at this years ‘Junipalooza 2019’ Festival.

You can read all about my Junipalooza 2019 experience here:

Citadelle Gin was conceived by Master Distiller Alexandre Gabriel nearly 30 years ago. But, as with all good stories, it was not without a few trials and tribulations… Having taken proprietorship of distinguished Cognac producing house ‘Maison Ferrand’, Gabriel wanted to use his passion for spirits to revive complex and age old gin production techniques to create something special and relevant. But he found himself, for a time, scuppered by numerous legal constraints, prohibiting him from distilling gin in his Cognac pot stills during the French AOC enforced periods of inactivity for Cognac production (April to October). But through sheer grit, determination and belief in his vision he was able to emerge victorious after five years of fighting the good fight. Citadelle, and the first artisanal French gin, was born!

Gabriel’s joie de vivre and raison d’être is to make spirits that are as skilful in their crafting as they are sophisticated in their drinking. And if you were to be in any doubt of his credentials, he was recently recognised with the “Outstanding Contribution to Distilling” award from the Craft Distilling Expo in London. One to hang on the fridge then for sure!

Crafted at Château de Bonbonnet, in Cognac, Alexandre has taken inspiration from the gins original production in the Citadelle of Dunkirk, commissioned as the royal distillery by Louis XVI in 1775. And while the Citadelle team still stick to many of the founding principles and techniques to this day, it’s also fair to say that the gin has been brought in to the modern era.

What I find most impressive and exciting of all is the ‘Chateau to glass’ ethos that is being sought after here. In 2017, the first juniper tree was planted at Château de Bonbonnet. And whilst its initial harvests may be modest, the ambition of the brand is to cultivate these humble beginnings in to 5 hectares of juniper trees.

That’s a lot of juniper trees…

And they’re not about to stop at the signature botanical of their gin and call it a day. For juniper is just one of nineteen botanicals at play in Citadelle Gin. Longer term, the team aim to work exclusively with local producers to ensure all of their botanicals are sourced as close to (if not directly at) the chateau. It’s heartwarming to hear and will be a spectacular success story to follow if they can pull it off.

A lot of focus has moved to bottle design in recent years – not just as a surface level vanity, but because aesthetics and branding are becoming a key USP if a gin is to differentiate itself in an increasingly swamped market.

Whilst much attention and focus has been rightly given to the bottles of newcomers hitting the scene, what Citadelle come packing with is mightily impressive! You could be forgiven for starting to think it has been rather influential to more recent artistic efforts…

The shimmering blue glass, with its fortified ridges, is both eye catching and original. You simply can’t miss it on the back bar. 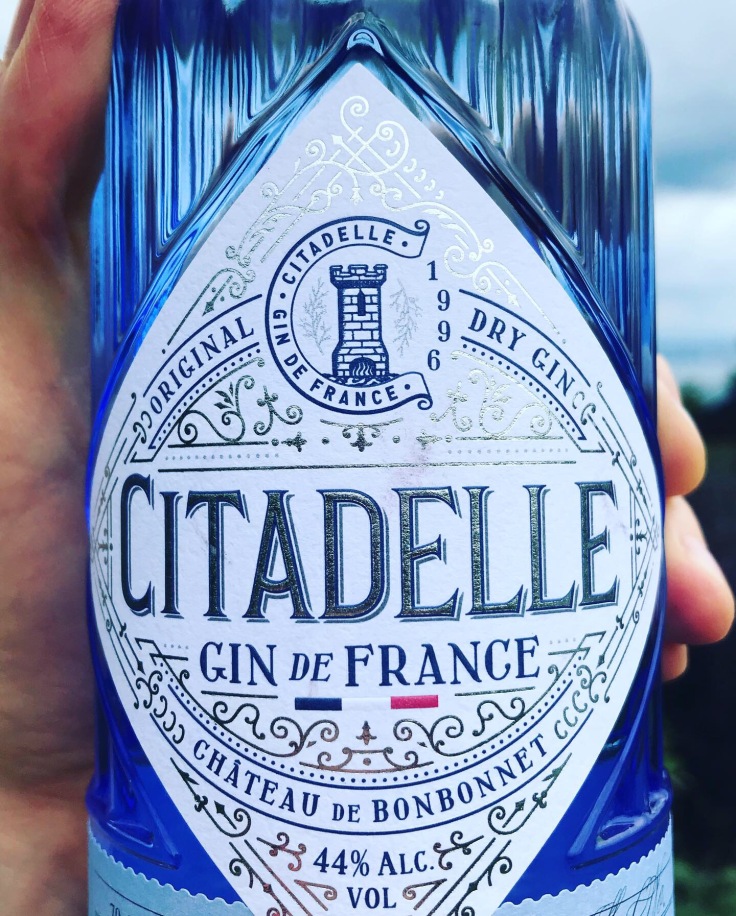 The red, white & blue colour scheme works in perfect harmony to leave you in little doubt of Citadelle’s French origin. But if you needed further clarity then look no further than the bottle neck, confidently stating that this is a ‘produit de France’, with the 1996 year of birth protruding from the cap.

In fact, the bottle cap is the only thing I have a slight niggle with. The choice of a screw top rather than a cork (which would surely be more in keeping with the classic French wine feel?!) comes across as a little ‘cheap’ and a missed trick. 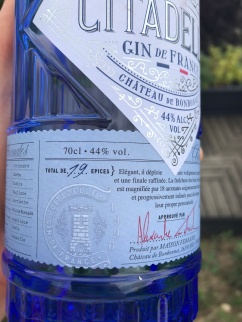 The detail of the gin and its origin, provided in a handwritten scripture styling, is in fitting with the gins story and heritage. It’s almost like reading the body of a bottle of French wine.

As alluded to earlier, Citadelle is forged of a line up of a meaty nineteen botanicals. In an era where gin is being stripped back to the essentials, in a fight against the plethora of ‘fake gins’ hitting the market, it’s a line up that can initially seem intimidating. The temptation can be to jump to conclusions of over complexity for little benefit. But stick with me…it’s a tasty menu! 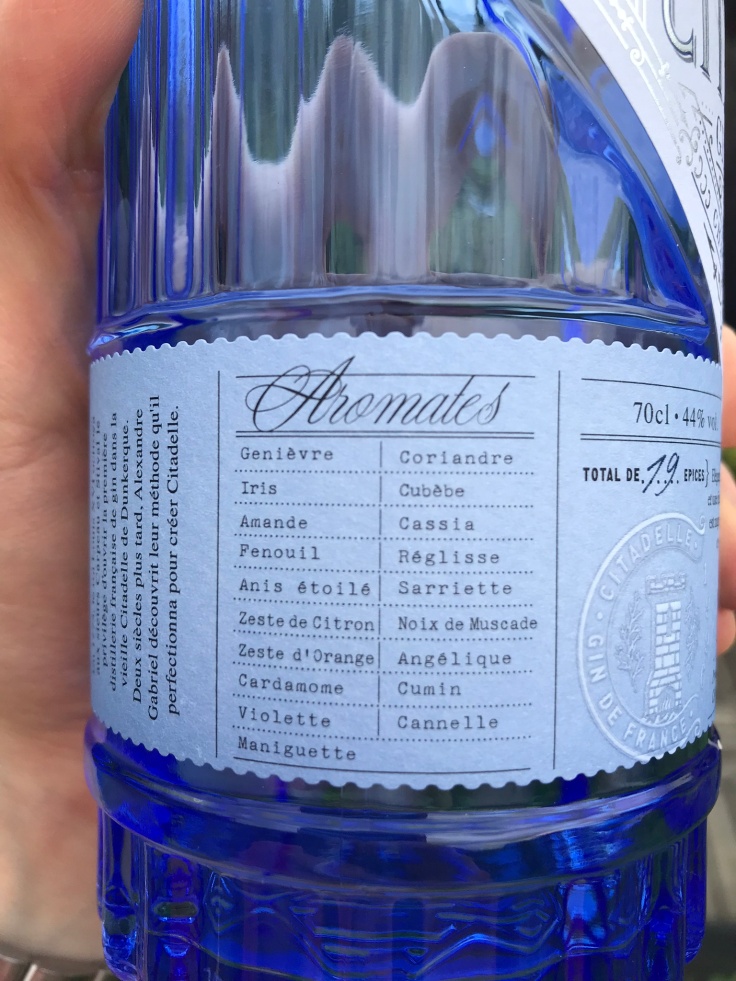 In Citadelle, translated from the bottle for your reading pleasure, you will find;

Lengthy botanical lists? King Louis? Cognac pots? Chateaus? What’s going on here?…It was time to put on my beret, put down my baguette and pick up my ‘verre de gin’ to find out more. In the words of Del Boy; Mange tout Rodney, mange tout…

On the nose, plump and juicy juniper oozes from the glass, with an almost oil like shimmer as it wafts around the nostrils. The liquorice, grains of paradise and angelica provide a dense, earthy backbone to the neat spirit supported by sweet spices of cinnamon and nutmeg.

There’s something almost floral to the gin. The iris and violet are delicate and not over powering but help to provide an elegance and light perfume. That said, the violet does becomes stronger and unmistakable once you’ve picked it out of the crowd.

For me, the citrus gleefully growths in strength the longer the gin is left to open up. Lemon and orange zest tangle in perfect harmony, presenting as a fresher fruit sensation rather than just a pithy bitterness. There’s no overwhelming ferocity on the nose, but there’s a suggestion of heat and power from the zingy coriander and cubeb pepper.

I was expecting the cumin, cardamom and fennel to perhaps be a bit more forceful on the scent, given they all have the potential to be overwhelming in their own right; alas they are in the background at best on first inspection.

In sampling neat, Citadelle is very much a story of ‘herbs and spice and all things nice’! Cracked black pepper and freshly sliced coriander provide a fire like finish on the tongue, with a dark liquorice warmth coating the back of the throat. It contains a bite that perhaps outweighs its not insignificant 44% ABV.

Fennel is far more discernible to taste, though I have to admit defeat on the cumin front. If it’s there, it’s escaping me!

There’s a definite sweetness to the neat gin, again coming courtesy of those festive-esq inclusions of cinnamon and nutmeg. But on swilling and letting the spirit develop, the citrus notes of orange & lemon, alongside the floral hit of violet, definitely help to present a sweeter nature of the gin.

In my opinion, this is a nicely worked balance of botanicals. I’d most likely stick this gin in the ‘herbal’ camp. But it’s perfume notes and citrus inclusions give a nod to other areas of the spectrum that leave you in little doubt that this is a gin that carries an air of complexity and sophistication.

When it comes to seeking out a longer serve, I’m at a cross roads…This is at the border of being both a great G&T and Negroni. So I did what any good gin blogger worth their salt would do…I had both! 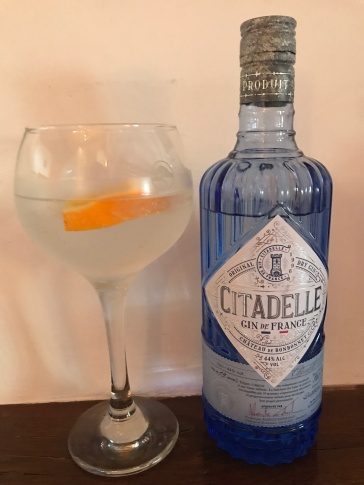 Serving with a light tonic & an orange wheel pulls some additional citrus forwards, whilst still maintaining that herbal nature with a crack of pepper and coriander heat. The fennel actually feels a little bolder with the addition of the mixer, supported by a sweeter feel of liquorice and a light dusting of cinnamon. If anything, the floral feel steps back ever so slightly, though violet is still in attendance if you look in the right places. Nice!

With Antica Formula and Campari, those luxurious and earthy Citadelle spices add a depth to a Negroni, supported by a weighty hit of juniper pine. A very welcome addition to the classic bitter cocktail!

So with a glowing review, I’m left scratching my head…

With a product of such quality, more than 20 years of notoriety on the gin scene, and being of French origin no less – why is France not shouting Citadelle Gins name from the rooftops?!

It’s a debate that could rage on, but for me it boils down to this. France already has a rich heritage and history of producing fine wines, Cognac, Armagnac and a host of other spirits, liqueurs and Eau de Vie’s. It seems that gin is currently still an anomaly for many, that is sneaking under the radar and masked by the history of what has come before.

That said, I am heartened by the potential that the ‘French Revolution’ could be closer then ever before. The very fact that I am holding a bottle of Citadelle, sourced from the local Promocash, is testament to a potential change of heart. And it’s an oil tanker style turning point that I’m starting to see reflected on gently developing bar and restaurant menus across France.

So whilst for now it is a shame that it appears Citadelles home nation aren’t celebrating as raucously as I feel they should be, it surely won’t be long before the best kept secret in France is uncovered.

But until then, I look at it this way…more for me!