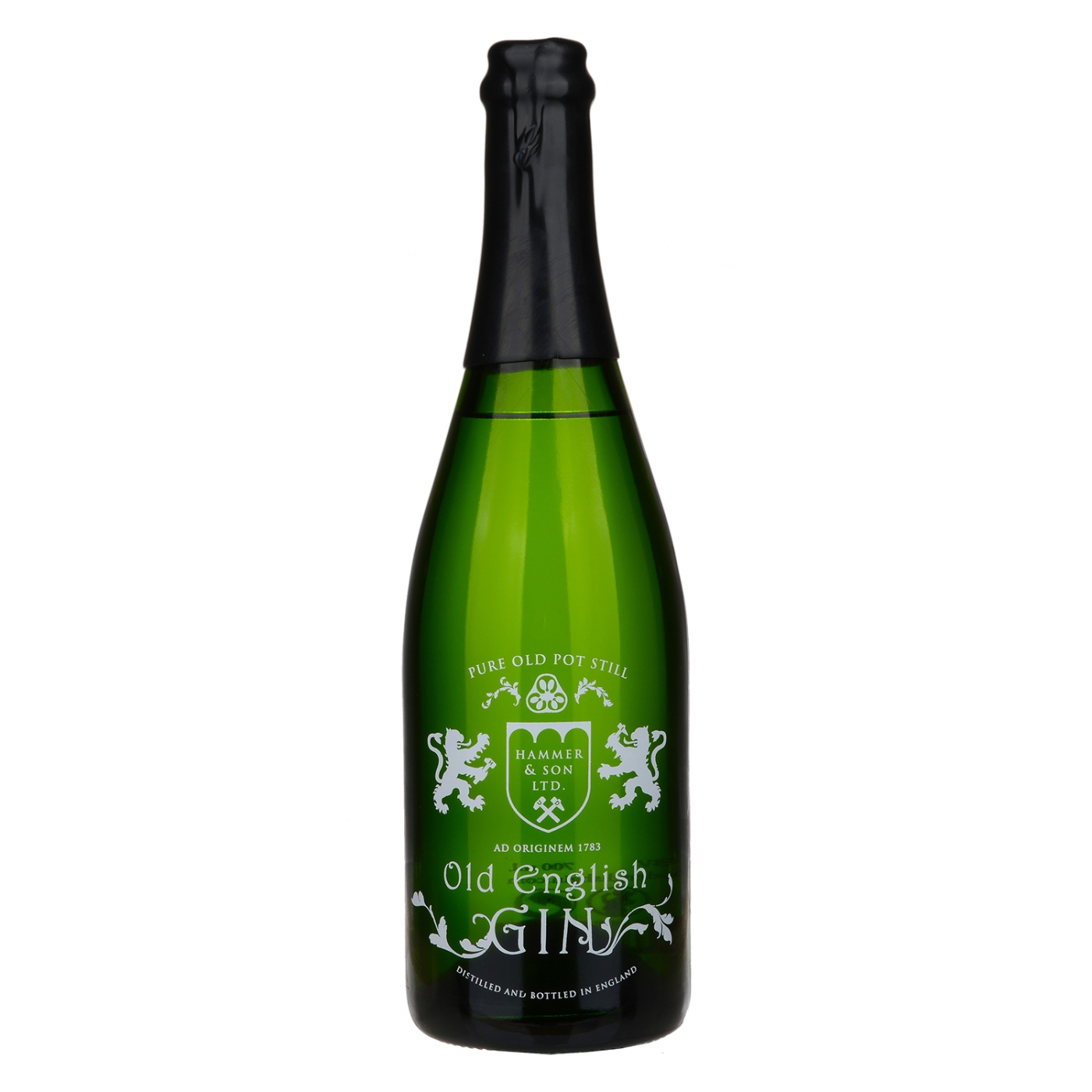 It’s the 18th June 2016. It’s an unusually warm British Summers day and all is well in the world. The England football team are in the European Championships, with a sense of palpable national expectation and excitement. I have an upcoming holiday to visit my parents in a France (which I’ve been procrastinating on sorting my Euros out for. Still, no rush…), and the rumours are a foot about the impending return of ‘The Great British Bakeoff’ in a few weeks time (which I don’t even class as a guilty pleasure these days). Could this be the best Summer ever? Was this our ‘Summer of love’? I felt positive. Optimistic. Even Patriotic!

This moment needed a celebration. It was at this point I reached for the gin. And with all this patriotism and sense of national pride, what better way was there to introduce ‘Old English’ gin?!

Created by Hammer & Son, and distilled in my ‘homeland’ of the Midlands, Old English is just what it says on the tin. Or Champagne bottle in this case…You see, Henrick Hammer set out to make a gin suggestive of how we Brits may have enjoyed the juniper tipple back in the eighteenth century – right down to sticking his creation in Champagne bottles! The idea being that we Brits liked to put away a fair amount of ‘fizz’, and glass bottles were expensive back in the day, so Hammer suggests that people would simply take their empty Champagne bottles to their local gin shop to refill them with a bit of ‘Mothers ruin’. Recycling at its very best, I think you’ll agree! The recipe itself, if you care to believe the marketing story, is top secret, dates back to 1783 and is kept under lock & key. How very cloak and dagger!

Is he factually correct? I don’t know – I must admit that I wasn’t around at the time. But, then again, neither were the rest of you and it makes a nice story to tell when pouring it for guests. So we’ll give him the benefit of the doubt.

Now. I was really excited to try this gin. With its recipe steeped in history, and a fancy bottle to boot, it was also named ‘Worlds Best Gin 2015’ at the World Gin Awards. Wowzers – there’s a claim! The thing that really intrigued me was the tasting notes I’d read. Whilst the botanicals themselves are not too wild & wacky (juniper, coriander, lemon, orange, angelica, cassia, liquorice, cinnamon, orris root, nutmeg and cardamom) this is a distilled gin, meaning the addition of sugar. Combined with the cinnamon tones, I’d been lead to believe this was an Old Tom style gin – a sweeter style than the more prevalent London Dry variants.

Yes. There’s a but. My optimism was rudely interrupted…

On the nose, you definitely get a strong hit of citrus, giving a fresh feel to the gin. Lemons and grapefruit zest grab you by the nostrils, with a more delicate introduction of orange following in behind. There is a hint of fresh cut grass to the scent. While this gin does come across as juniper heavy, the presence of coriander, liquorice and cinnamon present a suggestion of spice, which is nicely balanced out with sweeter notes. A good start then.

My disappointment began when I tasted the gin neat. There is a lot of heat packed in here. Don’t get me wrong – I don’t mind a gin that packs a punch. But this was much spicier than I had been expecting and I’d geared myself up for a sweeter affair! Coriander leads the way, which presents a much more ‘savoury’ finish than I’d been anticipating. There was a lingering taste that I couldn’t quite decipher at first, which eventually hit me as being ginger like. The combination of spice and citrus lulls you in to experiencing an almost ‘Liquorice Allsorts’ sensation.

Now, in defence of Old English, when I made this in to a G&T with an orange garnish I have to admit that the sweetness was pulled forwards, accentuating the fruitier botanicals and creating a refreshing long drink.

But unfortunately, it wasn’t enough to save the gin in my opinion. I was left deflated. And almost simultaneously, things started to fall apart…

The UK decided to vote with their feet during the EU referendum on 23rd June. That procrastination on sorting my Euros slapping me squarely in the face after all.

England then dropped out of the European Championships on 27th June, to a country I associate more with Kerry Katona than football (that’s Iceland, for the none football supports amongst you).

And, probably most devastatingly of all, on 13th September, news broke that Mel & Sue would be leaving the Great British Bakeoff.

I’m not saying that Old English gin is terrible. And, on considered reflection, I can’t legitimately claim that it’s disappointing end result had anything to do with the impending social unrest. In reality, this isn’t a bad gin at all. It’s just not what I expected.

I wanted to get swept up in the gins excitement, like the hope of a new dawn under the youthful exuberance of a 1997 Tony Blair. To say that this gin is the equivalent of a Nigel Farage would be going too far – this is more like a Gordon Brown. Harmless, but ultimately not going to become a household favourite or leave a lasting impression.

In footballing terms, I was looking for a ‘David Beckham’. It’d be unkind to say I found a ‘Wayne Rooney’. But think of it as being like finding a ‘Michael Carrick’. It gets the job done, but not in a memorable way.

I wanted to take it in to my heart, like Mel & Sue. Unfortunately, I walked in to the tent to find a flour covered Russel Howard. He’s a comedian, sure. He’s just not all that funny.

I really don’t want to put you off trying this gin. You might love it! But my concluding feeling was that I’m now glad to be looking forwards & not at the past. Plus, they say that bad news comes in ‘threes’, so that should be our fill!

In writing this blog I’m yet to check the latest headlines – but safe to say that as Hilary Clinton takes the hot seat as president of the most powerful nation in the world, I feel a renewed sense of positivity as I stride forwards to new gin experiences. What could possibly go wrong?!… 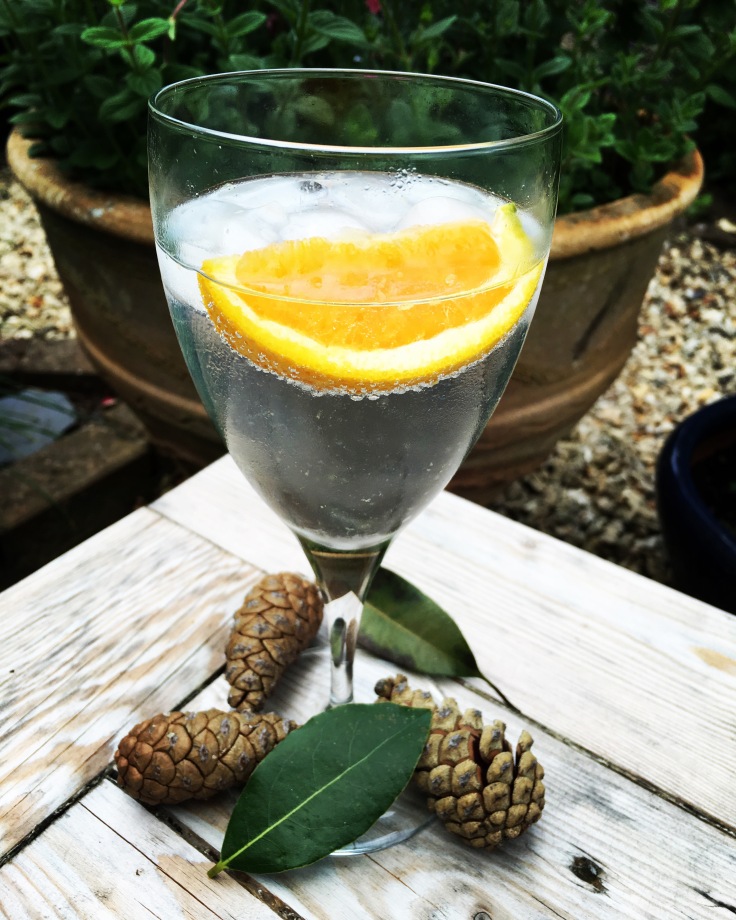