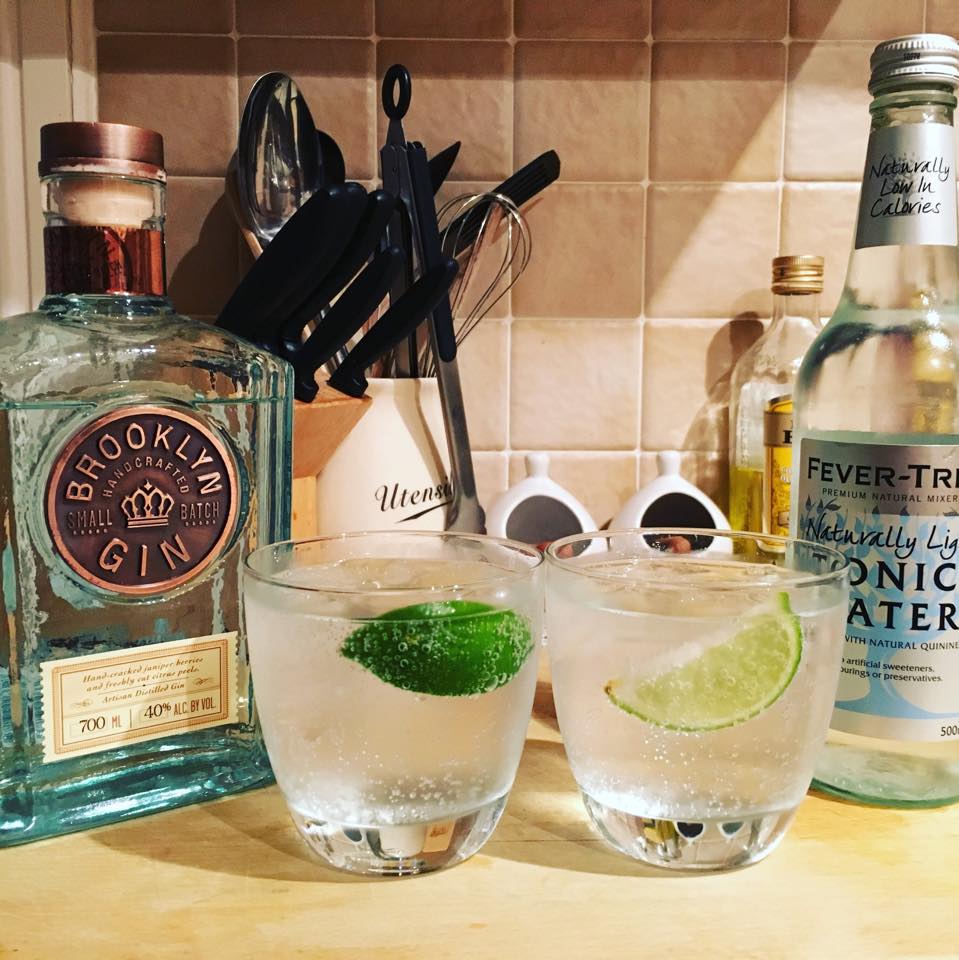 It was like Christmas morning. I say that because it was indeed precisely Christmas morning (25th December, 2015, to be exact) when I unwrapped my special delivery of ‘Brooklyn Gin’. My wife knows me well! Cocooned in a hardy kind of bubble wrap that’s reserved for only the most delicate of arrivals, I carefully removed it from its protective sleeping bag with the eagerness & excitement of a giddy child.

I’d first set eyes on ‘Brooklyn Gin’ during a trip to New York earlier in 2015. The first thing you notice is the bottle – it just feels special. The Brass effect label set in dead front & centre of the bottle, and the equally impressive bottle top, both emblazoned with the Brand name just ooze class. To hold, it carries a kind of weight and prowess that suggests its cargo is precious and one to be taken seriously. And then there’s the distinctive shape and design of the glass. It stands out from the crowd and resembles a kind of trophy. Which is perhaps suitable given its recent (and increasing) haul of awards, including a double gold medal at the 2015 New York World Wine & Spirits Competition, a gold medal at the 2015 San Francisco World Spirits Competition, a gold medal at the 2015 Craft Competition, and 91 points and a rating of “Excellent, Highly Recommended” at the 2015 Ultimate Spirits Challenge. Impressive, I thought.

All that could suggest a ‘big brand’, commercial product. But that’s not the case. You don’t need to look too hard to spot the ‘Small Batch’ reference front of the bottle. And these guys really mean it! In fact, they hand peel all of their fresh, locally purchased, Citrus fruit botanicals (totalling 5 of the 11 that make up the recipe) and hand crack their Juniper berries. They then embark on a 3 day distillation process, using one Copper still pot, that yields a grand total of 300 bottles, before the whole routine starts again. But not before they’ve labelled the bottles up by hand. This is a team who are purposely and proudly small & independent, which only serves to underpin the quality of their end result. Time consuming? Yes. Obsessive? Yes. Worth it? Absolutely.

So, to the important bit. On first ‘sniff’, you’re hit by an amazing blend of Vanilla, Caramel, wood/pine, Coriander, slight Citrus notes (think Lemon, Orange and Grapefruit peel) and a mellow spice. It almost has a buttery sweetness to it that draws you in. The clever bit comes on first taste. This little beauty packs a spicy, almost unexpected, punch that lingers with a satisfyingly long lasting warmth – deceptively masked by its modest 40% mark. That initial sweetness turns almost savoury, with heavy floral notes and an increasing presence of the Coriander – but not in an overwhelming way. I found the Citrus and Spice were neatly balanced, and when garnished with ice and Lime it makes a fantastically crisp Gin & Tonic. I absolutely loved it.

The one thing to note, to add to the complexity of the product itself, is that they’re not actually based in Brooklyn! Having embarked on their Gin making journey during the Financial crisis the guys at Brooklyn Gin were forced to resourceful measures, setting up camp with a partner in Warwick, New York. I’d place bets on them opening up in their Brooklyn name sake in the near future though. Watch this space.

The guys at Brooklyn state that their mission is ‘to help people drink better by making the best gin we can’. I can tell you from experience that they’re achieving that, and then some!

So if New York is ‘the Big Apple’ then this Gin is taking its place at the core of everything that’s great about Small Batch Gin making. And in the words of ‘Old Blue Eyes’ himself – start spreading the news folks. Because your gonna want to be a part of this…